Is simultaneous operation required for all showers on a loop? 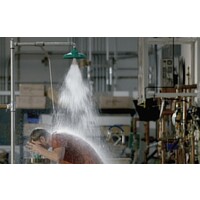 We often find customers are confused when it comes to the Australian Standards requiring simultaneous operation.

The main area of confusion is when a large site like a mine site or power station is plumbing in a loop for all their site safety showers and eye/ face wash units to operate on, and the question is normally around whether all showers on that loop are required to operate simultaneously;

Simultaneous operation means that for each shower combination unit that the shower/eye-eye facewash must be able to perform but still maintaining the AS4775 flow requirement.

Plus 1.5 lpm for eyewash and

AS4775 is being revised however performance requirements remain unchanged.

To ensure each shower is compliant we recommend specifying this shower unit https://www.industroquip.com.au/emergency-safety-shower-eye-facewash-s-s-pipe-gree

Are your Emergency Shower and Eyewash Units really compliant with the AS4775?

“Simultaneous Operation” is a major issue! The scary news is most sold in Australia actually aren't compliant!!!

The choice of an emergency combination shower is usually made to provide the ability to flush any part of the body that may have been exposed to a hazardous substance and correct performance is critical!