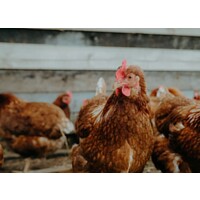 It is safe to say that Australian’s love their chicken, the gross value of Australian poultry meat production is $2.9 billion! In 2019-20, Australia produced 1.2 million tonnes of poultry meat (carcass weight). If that seems like a lot, it’s because it is.

On average, Australians consume 47.46kg of chicken per person each year, making it the highest consumed meat protein, ahead of beef, lamb, and pork! Unlike the red meat industry, however, Australian poultry meat is mainly grown for the domestic market, with very little exported overseas. In 2019-20, the total value of poultry meat exports was $85 million, with Papua New Guinea the largest export market in terms of volume and value.

Agricultural workers are exposed to numerous on-the-job respiratory hazards. Pesticides, fertilizers, dusts, disinfectants, paints and gases are just a few of the hazards, which may be encountered. Serious respiratory problems can develop from prolonged exposure to any of these airborne contaminants.

Despite smoking less, farmers have increased rates of chronic bronchitis. Components of agricultural dusts and gases are sufficiently irritating to the airways of the lung to cause mucus overproduction leading to repeated cough with phlegm. These respirable hazards are also a factor in asthma and allergic problems, (runny nose and irritated eyes) which may occur with initial exposure.

To avoid these respiratory illnesses in the poultry house environment, it is important to recognize the specific hazards and wear the proper respiratory protection. This fact sheet will help you to identify the hazard, offer methods to reduce exposure, select the proper respirator, and consequently ensure your health and that of your employees.

Respiratory Hazards on the Poultry Farm

Respiratory hazards are usually categorized as smoke and fumes, sprays and mists, dusts, and gases and vapors. Smokes and fumes are very tiny solid particles suspended in the air. They can be generated from welding to burning plastic materials. Sprays and mists are small liquid droplets that occur from spraying pesticides, paints, disinfectants, etc. Dusts are suspended solid particles ranging greatly in size. Dusts can be generated from grinding, milling, drillings or created in the poultry house or in a dusty field. Gases and vapors are molecules in the air and are typically found in confined spaces. Examples in the poultry house include ammonia and carbon monoxide from engine exhaust of tractors or skid steer loaders.

Dust in the poultry house environment is a concern for growers. Some factors affecting dust concentrations include bird and litter age, temperature, relative humidity, ventilation rate, time of day and bird activity. Respiratory protection becomes especially important when dust levels rise in the houses such as during colder weather when ventilation is reduced, with built-up litter, and during the grow-out period. Poultry house dust contains feed and fecal particles, feather barbules, skin debris, fungal fragments, and spores, bacterial and bacterial fragments, viruses and particles of litter. This type of dust is typically known as organic dust, since it is derived from materials formed by living organisms. Such dust was generally considered nuisance or inert, meaning it has little adverse effect on the lungs. New research though shows that because poultry house dusts are largely organic and contain bacteria and other bioactive substances, it cannot be considered inert.

Poultry house dusts also contain what is known as endotoxins, which are toxins of gram-negative bacteria. These inflammatory substances can cause toxin fever which is similar to influenza. Symptoms include headache, nausea, coughing, nasal irritation, chest tightness, and phlegm. Endotoxins are responsible for a number of work-related acute and chronic illnesses such as those mentioned above.

Ammonia is prevalent in most poultry houses and especially during the winter months. It is produced from the breakdown of nitrogenous compounds and characterized by a sharp and pungent odor. Ammonia concentrations can be particularly damaging to your health during periods of minimum ventilation. This can be between flocks when the house is closed or during the brooding period.

Ammonia is considered an irritant and readily impacts the eyes and respiratory tract. Ammonia can increase the susceptibility of the respiratory system to airborne pathogens. This is due to impaired mucus flow and ciliary action in the upper respiratory tract which is the first-line of disease defense in humans and poultry.

Recent research has shown that ammonia levels can easily exceed OSHA and ACGIH recommended levels. The recommended level for short-term exposure (15 minutes) is no greater that 35 ppm. Unfortunately, many poultry growers who have worked in an ammonia-laden environment for years are unable to detect ammonia below 50 ppm.

If you fall in this category of individuals, there are several methods of detecting ammonia. These include litmus paper, detection tubes and electronic devices. Accuracy, ease of operation and calibration, and cost are factors to consider in the selection of ammonia detection devices best suited for your needs.

Here at Industroquip we stock the Moldex and Sundstrom ranges of respiratory protection equipment ready for fast shipping Australia wide.

If you would like more information on the correct respiratory protection required for working in chicken sheds please contact the Industroquip team on 1300 554 192 or sales@industroquip.com.au.